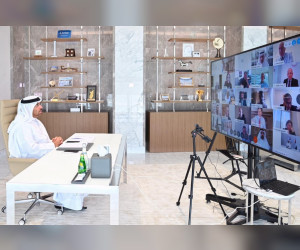 ABU DHABI, 28th July 2020 (WAM) – The UAE-UK Business Council, UUBC, on Tuesday conducted its 17th Round Meeting. The meeting served as a relaunch of the Council, which was established in 2011 as a non-profit association to develop business relations and increase trade between the UAE and the UK.

The event was Co-Chaired by Minister of State, Ahmed Al Sayegh, and the British Prime Minister’s Chief Strategic Advisor, Sir Edward Lister, and attended by a number of private and public sector representatives from the UAE and the UK.


Since their appointment as Co-Chairs in November 2019 and March 2020 respectively, Al Sayegh and Sir Edward have enacted a series of far-reaching reforms to the remit and structure of the UUBC, ensuring it fully grasps the plethora of business and trade opportunities emanating from the UAE-UK bilateral relationship now, and into the future.

During the meeting, it was highlighted that the UUBC reforms, including the establishment of a joint UAE-UK Secretariat based in London, and the development of a new Working Groups’ structure that will expand cooperation in new and emerging fields of economic interest, were essential in ensuring that the UAE and UK bilateral relationship maintained its positive and constructive trajectory.

Al Sayegh expressed his gratitude for the support provided by UUBC members during the reform process. His Excellency also recognised the strong collaboration that had taken place over many months between the UUBC, the British Embassy in Abu Dhabi, and the UAE Ministry of Foreign Affairs and Cooperation in fully achieving the immense revitalization of this critically important organization.

He underlined that through the constructive engagement of both the UAE and UK public and private sectors, the UUBC will maintain its place as a premier business-led organization.

During the meeting, the UAE and UK Co-Chairs of newly established Working Groups were confirmed.

From the UAE side, the following appointments were announced:

Dr. Wafi Dawood, Board Member and CEO of Strategy and Planning at Dubai’s Knowledge and Human Development Authority, KHDA, as Co-Chair of the Education, Vocational Skills and Training, Social, and Cultural Development Working Group;

Badr Al Olama, Head of Aerospace and Defense at Mubadala, as Co-Chair of the Infrastructure and Industry Working Group.

It was underscored that close and cooperative engagement at the Working Group-level between UAE and UK Co-Chairs will be essential to the further development of investment and trade ties between the two countries, and in guaranteeing tangible outcomes are provided to UAE and UK businesses.

The UAE is the UK’s 19th-largest trading partner with bilateral trade standing at AED 86.46 billion at the end of 2019.

Membership of the Business Council is by invitation only at CEO or Executive Board equivalent level. There are usually 20 UK members and a similar number of UAE members. Current members include: ADNOC, BAE Systems, Barclays, BP, Emirates, Etihad, Mubadala, Musanada, Rolls-Royce, and Shell.

The role of the Business Council is to:

Identify and recommend actions to progressively remove impediments to greater trade, investment and commercial links between the two countries;

act as a catalyst for greater interest and linkages between the two countries’ commercial sectors from small and medium sized enterprises to multinationals;

propose innovative fields of collaboration that would benefit both countries economically and commercially and strengthen the partnership internationally; and

provide strategic advice to the two Governments as appropriate.