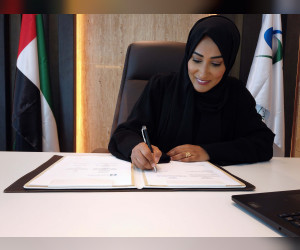 ABU DHABI, 8th July, 2020 (WAM) — The Environment Agency-Abu Dhabi, EAD, has signed an official agreement with the largest aquarium in the Middle East – The National Aquarium – to help create the largest and one of the most innovative rehabilitation schemes of its kind to protect and rehabilitate wildlife in the Emirate of Abu Dhabi.

According to the agreement, both parties will be working closely together to conserve wildlife, specifically wild sea turtles, which will be rehabilitated within the aquarium.

Furthermore, the five-year contract outlines how The National Aquarium will support to EAD with some of its ongoing wildlife conservation programmes, the development of new awareness campaigns and unique educational experiences in the region.

The National Aquarium will also work with the agency in further research studies and gathering of data, while encouraging exciting internship opportunities for students of biology, ecology, and veterinary education.

Dr. Shaikha Salem Al Dhaheri, EAD’s Secretary General, said: “We are delighted to initiate this rehabilitation project, in collaboration with The National Aquarium. Having such facilities within the confines of Abu Dhabi will assist our continuous efforts to preserve wildlife in the emirate. By collaborating with The National Aquarium, we will be able to rehabilitate various wildlife species before releasing them into their natural habitats, while expanding our scientific studies.”

She added that Sea turtles would be one of the main species that the project will focus on, and this agreement will add to the successful rehabilitation projects that have taken place over the years.

She stated: “As far back as 2001 we have been working on conserving Sea turtles in Abu Dhabi waters. Now, the overall foraging Sea turtle populations, namely Hawksbill and Green Turtles, have been relatively stable over the last decade. Based on data from aerial surveys, we have more than 5,000 wild sea turtles in our waters.”

We are honoured to partner with EAD and invest in such an inspiring programme. To bring this exceptional project to life, we have hired a world-class team of experts to manage the rehabilitation of important marine and terrestrial wildlife in the Emirate.”

Paul Hamilton, General Manager of The National Aquarium said: “We want to create memorable moments for people to reconnect with nature. Our daily lives have become disconnected from the natural world and while we are slowly realising the impact that humans are having on the environment, there is still a long way to go to address these issues. That is why it is so important to reach new audiences and educate future generations about the importance of protecting and rehabilitating our wildlife and ecosystems.”

He added: “We recognise the important role we must play with regards to education and the conservation of Abu Dhabi’s natural treasures. Hence, we have constructed specialised facilities and a rapid response vehicle to assist our veterinarians in effectively reacting to wildlife emergencies.”

The National Aquarium is going to provide full veterinary treatment support and in-house care, as well as general animal husbandry expertise, until the animals are fully recovered before their release back into nature. They will also collaborate with EAD for satellite tagging and services, when required.

Wild sea turtles are among the most highly migratory animals on the planet, and their numbers are a great reflection of the condition of marine environments. Of the seven species of marine turtles in the world, two occur in Abu Dhabi’s waters: the Critically Endangered Hawksbill turtle and the Endangered Green turtle.