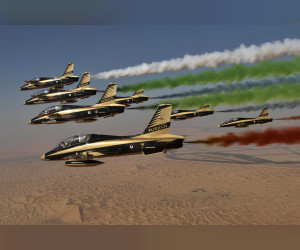 ABU DHABI, 19th June, 2020 (WAM) — The UAE Air Force’s aerobatic display team, Al Fursan, will be seen in the skies over a number of the country’s hospitals for three days starting Sunday, June 21, in an initiative of appreciation by the General Command of the UAE Armed Forces for the nation’s medical teams and staff.

The initiative translates a message of gratitude by His Highness Sheikh Mohamed bin Zayed Al Nahyan, Crown Prince of Abu Dhabi and Deputy Supreme Commander of the UAE Armed Forces, who has many a time appreciated the fundamental role played by the nation’s doctors, nurses, paramedics, and administrative and technical staff, who are working round the clock under tough circumstances to ensure public safety and health in the face of the COVID-19 pandemic.

The Al Furan team have invited the public to share these moments of pride and unity with the Armed Forces in appreciation of the nation’s first line of defence for their tireless efforts and eminent role in confronting the COVID-19 pandemic.